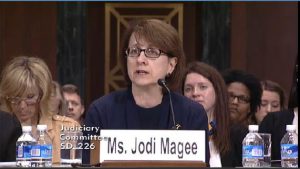 Despite widespread public disagreement, anti-choice members of Congress continue to introduce legislation restricting access to abortion and doctors’ ability to provide patients with the highest level of care. On Tuesday, Physicians’ Jodi Magee testified at a Senate Judiciary Committee hearing in Washington, DC, to express Physicians’ strong opposition to these abortion bans.

“Make no mistake; the legislation we’re discussing today represents another attempt to make it impossible for women to access abortion,” Magee said during her oral statement. “Because politicians know that the public and major medical groups do not support this position, they are disingenuously presenting these restrictions as only applying to very limited situations. But let’s be clear: this is part of a concerted effort to intrude on the personal health care decisions of women.”

Magee was joined by Dr. Diana Greene Foster, of the University of California-San Francisco and Ms. Christy Zink, a mother of two, in testifying against the bans at the hearing. The hearing was reported on widely by news outlets like Politico and MSNBC, and coverage highlighted the statements by pro-choice Senators who took to the floor Tuesday to decry the proposed bans as the latest step in a long line of attacks to “turn back the clock on women’s health care”.

You can watch Magee’s testimony on the Judiciary Committee’s website.