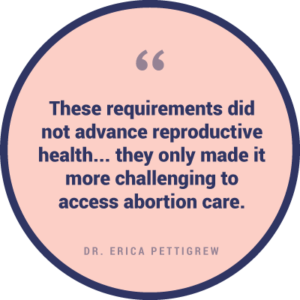 That was my Facebook post on the morning of June 27, 2016 when the Supreme Court of the United States issued their ruling on Whole Woman’s Health vs Hellerstedt. I remember that morning vividly–I had just graduated residency and was preparing to move back home across the country to practice full-scope family medicine in the South. Part of my training included abortion care, but I knew there would be many obstacles in my path to providing that care. That morning in 2016 was when the Supreme Court of the United States diminished those obstacles. I’ll never forget waking up and, with dread, opening my computer to read the freshly issued decision–only to start crying tears of joy (I wish I could say this was the first time I’ve cried over the Supreme Court, but it’s much better when out of happiness).

As someone who holds both medical and law degrees, I can’t help but recognize the significance of today, the third anniversary of that wonderful decision. Whole Woman’s Health vs Hellerstedt overturned an overwhelmingly burdensome and irrational Texas abortion law. The outcome of that case was not a foregone conclusion—on the contrary, up until the ruling was issued, many in the reproductive health, rights, and justice movements were holding our collective breath worrying about a further gutting of the protections to health care as defined under Roe vs Wade. It turned out to be an unequivocal victory, however, for bodily autonomy, reproductive health access, and the role of scientific evidence in the legislative process. It’s easy to forget just how monumental this case is since post-Roe Supreme Court decisions are a mixed bag, at best, for greater access to health care.

In Whole Woman’s Health vs Hellerstedt, the plaintiffs argued that two provisions of Texas’s H.B. 2 (the bill that Sen. Wendy Davis famously filibustered for 11 hours) were unconstitutional under the Fourteenth Amendment. The provisions included burdensome and unnecessary requirements that abortion providers have hospital admitting privileges within 30 miles of abortion clinics and that abortion clinics be retrofitted as ambulatory surgical centers. These targeted regulations of abortion providers, or TRAP laws, were in existence for the sole purpose of shutting down health clinics that provide abortion care. Just about half of Texas’s clinics were forced to close when the admitting privileges requirement was enforced, and many more would have had to shut down if the ambulatory surgical center provision had gone into effect.

“These requirements did not advance women’s health, as Texas claimed, and in fact worked counter to this stated goal”

These requirements did not advance women’s health, as Texas claimed, and in fact worked counter to this stated goal as these provisions were not medically necessary—they only made it more challenging to access abortion care. The Supreme Court agreed, and both provisions were struck down in a sweeping decision which characterized the requirements as “undue burdens” on people seeking abortion care. This was a huge step forward.  Now my patients won’t have to worry about their clinics shutting down because the local hospital refuses to grant me unnecessary admitting privileges, or because the clinic’s hallways are not eight feet wide, or because the scrub station isn’t within five feet of the operating room. Scrub stations and operating rooms are not even a part of my abortion provision – I provide first trimester terminations.

There were 45 separate amicus briefs filed on behalf of Whole Woman’s Health against these provisions. Among the authors are the American Medical Association, American Academy of Family Physicians, American College of Obstetricians and Gynecologists, American Academy of Pediatrics, American Academy of Nursing, and American Public Health Association. This speaks to the power of working within these organizations to speak out on what’s right for patient-centered, evidence-based health care. There is an amicus brief from a group of historians urging the Supreme Court to consider H.B. 2 as a continuation of “romantic paternalism”—the idea that women are inferior and need “protection” at the expense of their liberty and autonomy. Our very own Physicians for Reproductive Health filed a beautiful brief, summarizing the perseverance abortion providers display in our fight to provide health care. There is even an amicus brief from 113 women in the legal profession who wrote a compelling, soul-baring piece detailing examples of how their abortions allowed them to become lawyers.

“In all of medicine there is no greater, more direct example of health care professionals being human rights defenders than in abortion care.”

In all of medicine there is no greater, more direct example of health care professionals being human rights defenders than in abortion care. We are defending people’s constitutional rights when we are walking through the gauntlet of name-calling, anti-abortion protesters in a parking lot, or when we’re listening to a patient tearfully explain that she can’t take care of a new baby now that her one year old’s been diagnosed with a devastating medical condition. We don’t usually frame it that way, but that’s what we are doing. And thanks to the courageous, skillful work and foresight of the Whole Woman’s Health team, not to mention Justices Breyer, Ginsburg, Kagan, Sotomayor, and Kennedy, we can celebrate our ability to continue our work providing constitutionally-protected health care.